This weekend is Ragnar SoCal and I wish I was running, so I wanted to take a trip down memory lane to my first Ragnar experience!

Here is my Ragnar Relay recap from April 2012:

I ran the SoCal Ragnar Relay! While nursing! It’s one of the most incredible things I have ever done. It is a 200-mile relay race from Huntington Beach to Coronado Island. You are on a team of 12, in two giant vans, and one member of your team is running at all times! You have 3 different legs, and my legs added up to a total of 14.5 miles. 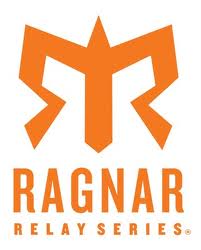 I drove down to Santa Maria on Thursday to drop my girls off at my mom’s house. Thank you Mommy!! I was so stressed out by many things…I had a stress (ha) fracture on the top of my right foot that wasn’t completely healed, I had to pack all of my girls’ things to leave at my mom’s, then pack all of my things separately for the race to take down to Huntington Beach. Matt had just graduated and was in the middle of interviews and work so stayed up in Santa Cruz. I ended up with a stiff neck and am grateful for Rach and Tiana for rubbing it so I could run! I made granola bars and we had lots of good snacks for the road. We spent the night at one of Elise’s friend’s house…thank you friends!! Tiana, Rach, & I ended up sleeping in a closet converted into a bedroom with Bob Marley flags and a bong in it. It was comical :) I had to pump in the bathroom during the night and people kept asking, “What’s that noise?” haha

Here is beautiful Tiana, ready to run her first leg. Our team name was Run Like an Egyptian, hence the flashy costumes. It was already really hot at this point in the morning! 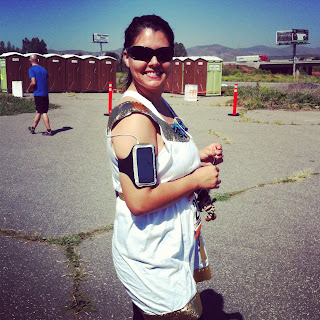 Here is my gorgeous cousin Rach, who ran right before me. It was SO HOT here! We were resting up in the shade. She had a really rough time, and I was worried when she wasn’t at the exchange in the amount of time she told us she’d be there. There was a saint of a man who helped her along, and she finally made it through the 110 degree heat and to hand off the bracelet to me. 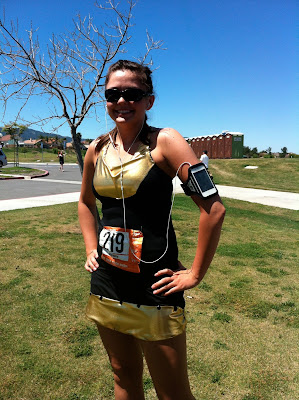 Game face on. Nobody recognized me without my smile :) 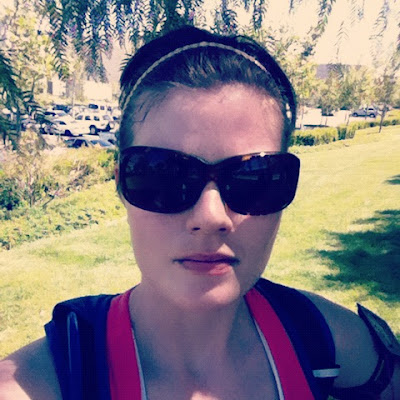 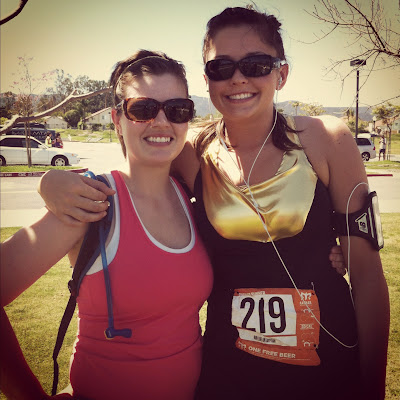 What happened during my run was the worst run of my entire life. It was 110 degrees out, in the middle of Corona, CA. There was a heat advisory, and I was running 5.65 miles straight up a canyon! I could feel the asphalt burning my skin. It felt like a giant griddle on high heat under my feet. See the CamelPak I’m wearing in the picture above? I ripped it off my back and gave it to my teammates around mile 2 because it was BOILING. I went for a sip and it was so hot I just spit it out.

The only thing that kept me going up that cursed canyon was knowing that I would see that big white van pulled over, with my team cheering me on. Bringing me water, pouring it down my face to have it dry seconds later, and offering words of encouragement.

What really surprised me about Ragnar was how supportive other teams were. A random team gave me water during a long stretch. I caught up to a woman and stopped to commiserate about the heat, and she and I stayed together for most of the leg. We ran a minute, walked a minute. It kept us going. I really appreciated the camaraderie between teams!

I have never experienced heat exhaustion like that. I trained in 60-70 degree beach weather in Santa Cruz, my body was in complete shock! It was strange, my legs and everything felt fine, it wasn’t a soreness or pain. It was like the energy and life had just been sucked out of me. Getting to the top of Temescal Canyon and seeing Mary ready to run was one of the best feelings in the world!

I was dreaming of this Dr. Pepper the whole run…that server was my best friend because he kept ’em coming :) 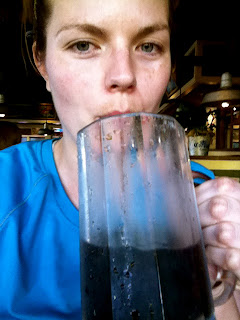 After our van finished up our legs, we were able to head over to this crazy little place in the middle of a valley, the Lawrence Welk Resort. Who knew such a place existed?! We busted out our sleeping bags, grateful for the cool evening air, and got some much needed rest. 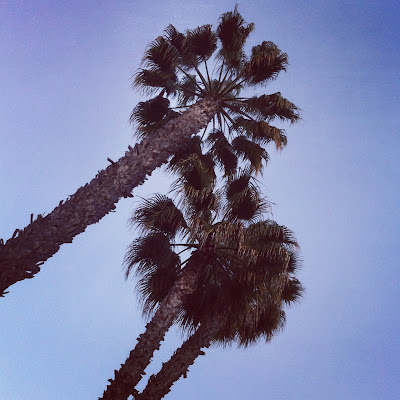 We also equipped the vans with lights and all things LED!

Elise sliding down the front of the van: 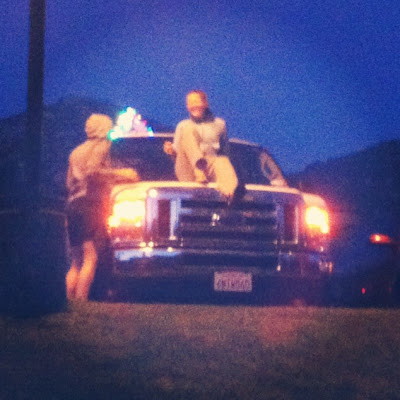 We got word from Van #1 that we were almost ready to run. So we all met up and cheered our team on! Then off to the next exchanges. Thank goodness for Carly & her Garmin! That thing got us everywhere we needed to be on time. Carly’s mom was our driver and she was a hoot! So full of energy, she gave us little tokens along the way to lift our spirits, and she was just so fun. She filled in for us last minute and I am so glad it was her! 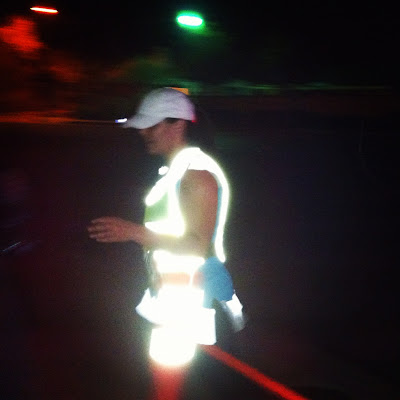 Night runs are my FAVORITE! I have always been a night runner. I used to run with my dog, and just love being outside in the dark and cool air. If Matt will go with me, I will run every night. My run was through the city of San Marcos and I will NEVER forget it! I passed (killed) three people and felt like I was flying. I ran 3.75 miles in 38:42 which was a PR for me :)

We rented a hotel for the night and each took turns “sleeping” (it is so hard to relax when you’re waiting for the text that runner #6 has begun and you’ve gotta get in the van and go!) and showering. I may or may have not timed people’s showers on my phone so that we all got a turn :) 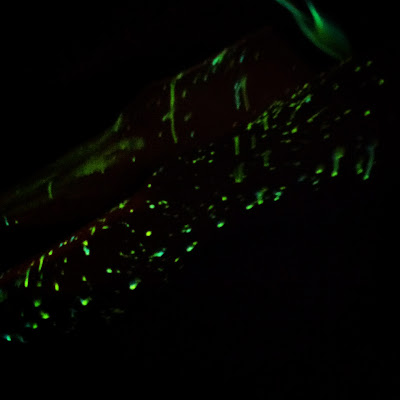 Our vans were AH-MAZING!!! Kandie constructed these pyramids that were feats of engineering. Everyone watched our vans as we drove by and we were notorious by the end of the race!

Rach showing them off in all of their glory :) 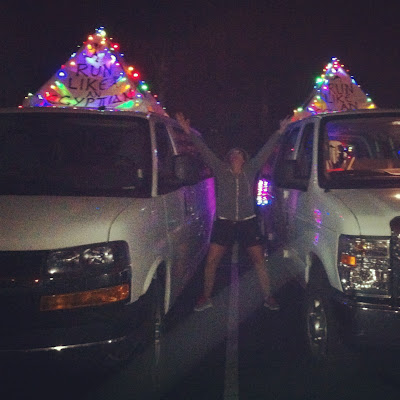 Everyone gets crazy on little sleep, add in exhaustion and adrenaline from running and it’s hilarious.  I get really giggly and crazy and Tiana gets sleepy and quiet. Nothing’s changed since we were kids! I just found out on this trip that she asked her mom to take me home from her 7-year-old birthday slumber party because I wouldn’t go to sleep! hahaha :) We had some fun times on this trip, all of us laughing and talking.

My third run was the next day, and it wasn’t good. I never expected to talk so openly about bodily functions with a group of people. But, pooping is very important to how well you run, so there you have it. I had to go so bad my whole run and then when I was done running, I couldn’t go. It was so frustrating. I was the second to last runner, so I was really grouchy at the finish line. But sooooo happy to have completed the race and to receive my medal! 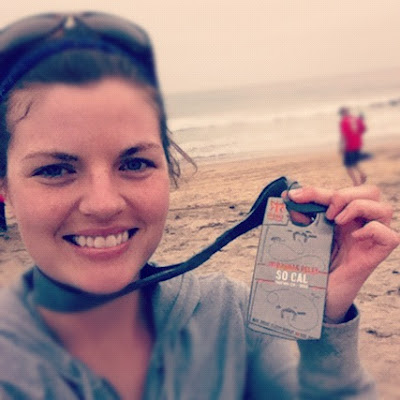 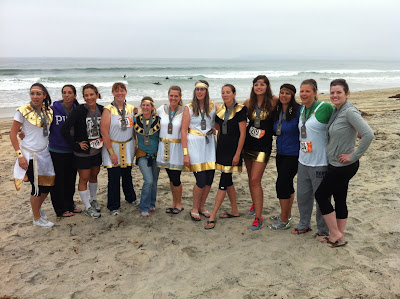 – pack all clothes & underwear for your legs in separate giant Ziploc bags, your van will thank you

– pumping in a hot van without tinted windows is not fun, I’ll never run a Ragnar again while nursing

– next time, I want to wear my costume/have time to do make-up/get more into the party part of it all (see above)

– The Stick saved my calves! With no time to stretch after your run and before jumping in the van, this was a lifesaver, thanks Elise :)

– you will become addicted. I want to do another one so bad, and was on a backup list for next month’s…but the team dissolved :(

– you will make life-long friends 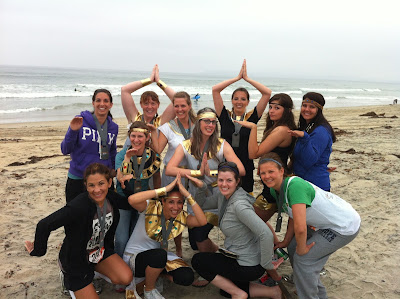 Best part of it all?

Coming home to these faces :) 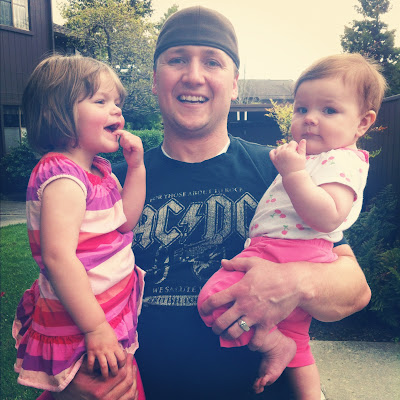 Can’t wait for the next one…who’s in?!